We were intending to shoot the story in the exotic desert cities of Rajasthan, for CondeNast Traveler USA with the brilliant and talented fashion director Mark Connolly. The shoot was to be featured in my TV series Nomad Traveller, about photography, travel, art, architecture and design. However as fate had it, my film crew and I had arrived at the Taj Mumbai, minutes before the terrorist attack. We were held hostage for days and some of the crew were shot at. We escaped by smashing through windows in the ballroom, tying the long curtains together and sliding down 30 ft to the ground. We managed to get 60 people out but were exhausted and traumatized. 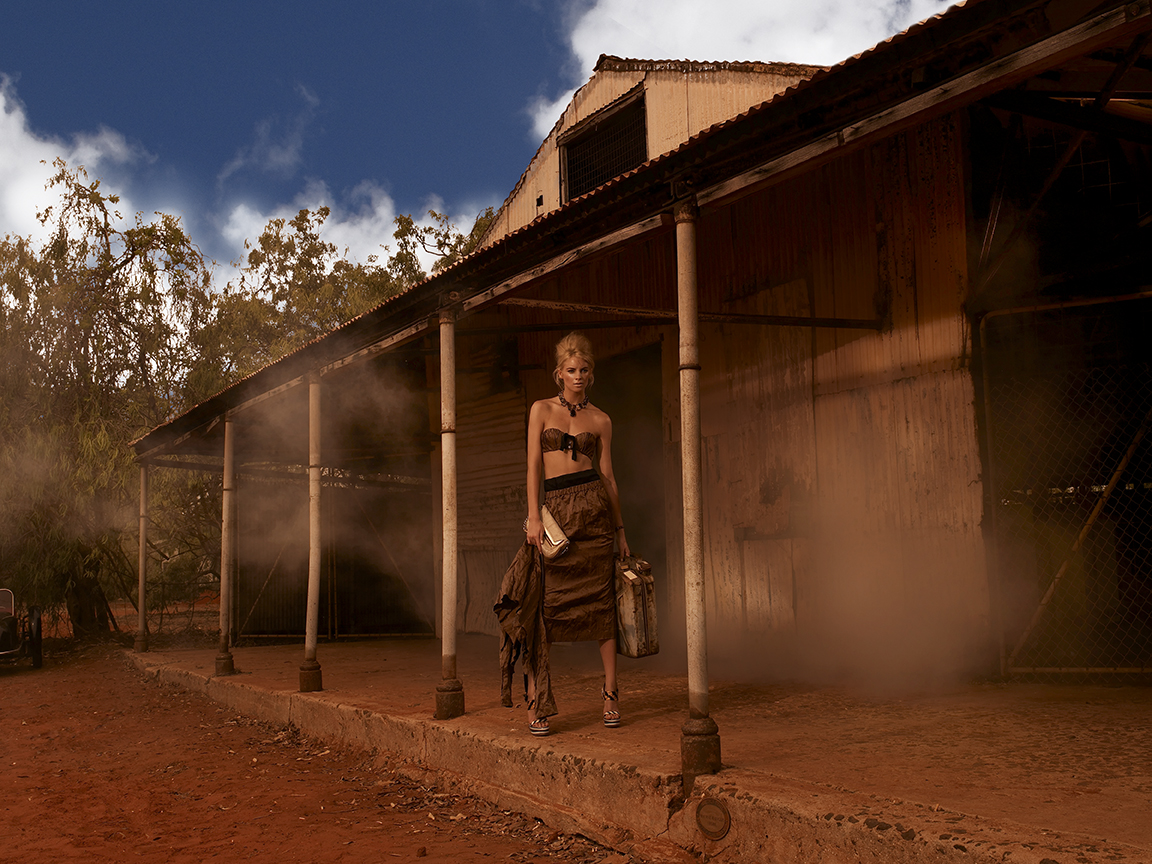 Even though I was living in NYC, I returned to Australia to spend time with my son and partner who were vacationing there. Mark was still in NYC, and needed to shoot the editorial. He called me in Sydney and asked if I was interested in shooting the story in Broome Australia. He flew 40 hours to get to Broome, which showed his remarkable loyalty and support.

Broome is visually spectacular and is located on the furthest western tip of Australia. It’s an old pearling town and Australia’s equivalent of the Wild West. It has a unique color palette of red, blue and green. The desert is red from the Pindan mineral. The Ocean has a greenish turquoise color and the blue is from the vibrant blue sky.

It was founded in the early 1900s as a pearling town and the wealthy settlers enslaved the Aboriginals to dive for pearls. With the abundance of pearls the Chinese and Japanese divers soon followed. The main street had a pub on every corner, a bank and general merchandise store and was notorious for its decadence, prostitution, drinking and gambling. This was juxtaposed with the very proper Victorian morality of the sea captain’s wives. 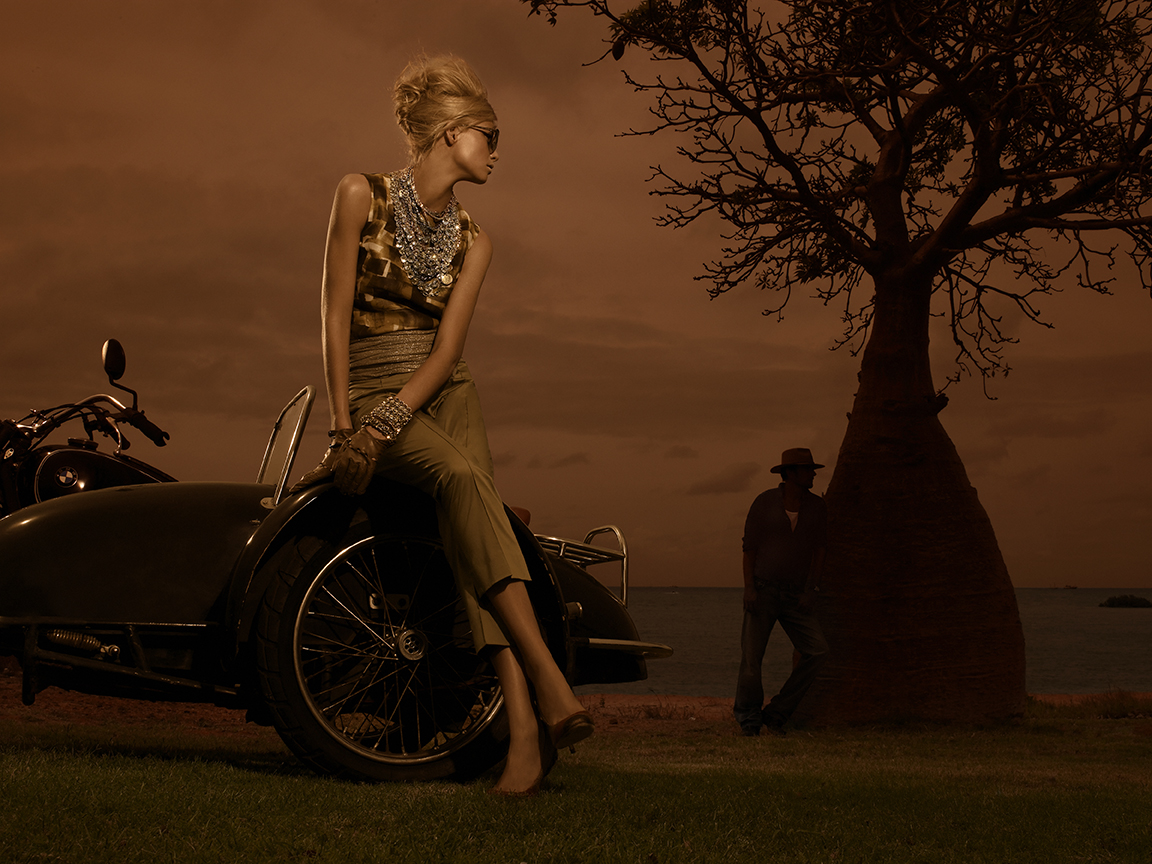 Broome is still home to some of the biggest pearl companies in the world. I had shot the Paspaley Pearl campaign who are based there and supply the world with most of its high-end pearls. I made a quick phone call to Clare Paspaley, who generously suggested we take their magnificent Mallard Sea Plane, to see the remote pearl farms.

Mark wanted to create a character that resembled a Hitchcock woman dropped in an Australian Desert Outback Town…A little disheveled from the desert heat. We cast the wacky Australian model Elyse Taylor, who was brilliant. An Aboriginal Guide took us scouting to stunning locations and told fascinating stories about Aboriginal culture. He took us to Gantheaume Point, which is a sacred ground where animal spirits lived. We found ancient Dinosaur footprints embedded into the rock. My favorite shots from this shoot are  Sun Pictures, The Mallard and the Camels on Cable beach. I wanted to shoot cinematically, using a horizontal format. We used pools of light mixed with natural light to deepen the overall density and saturation. 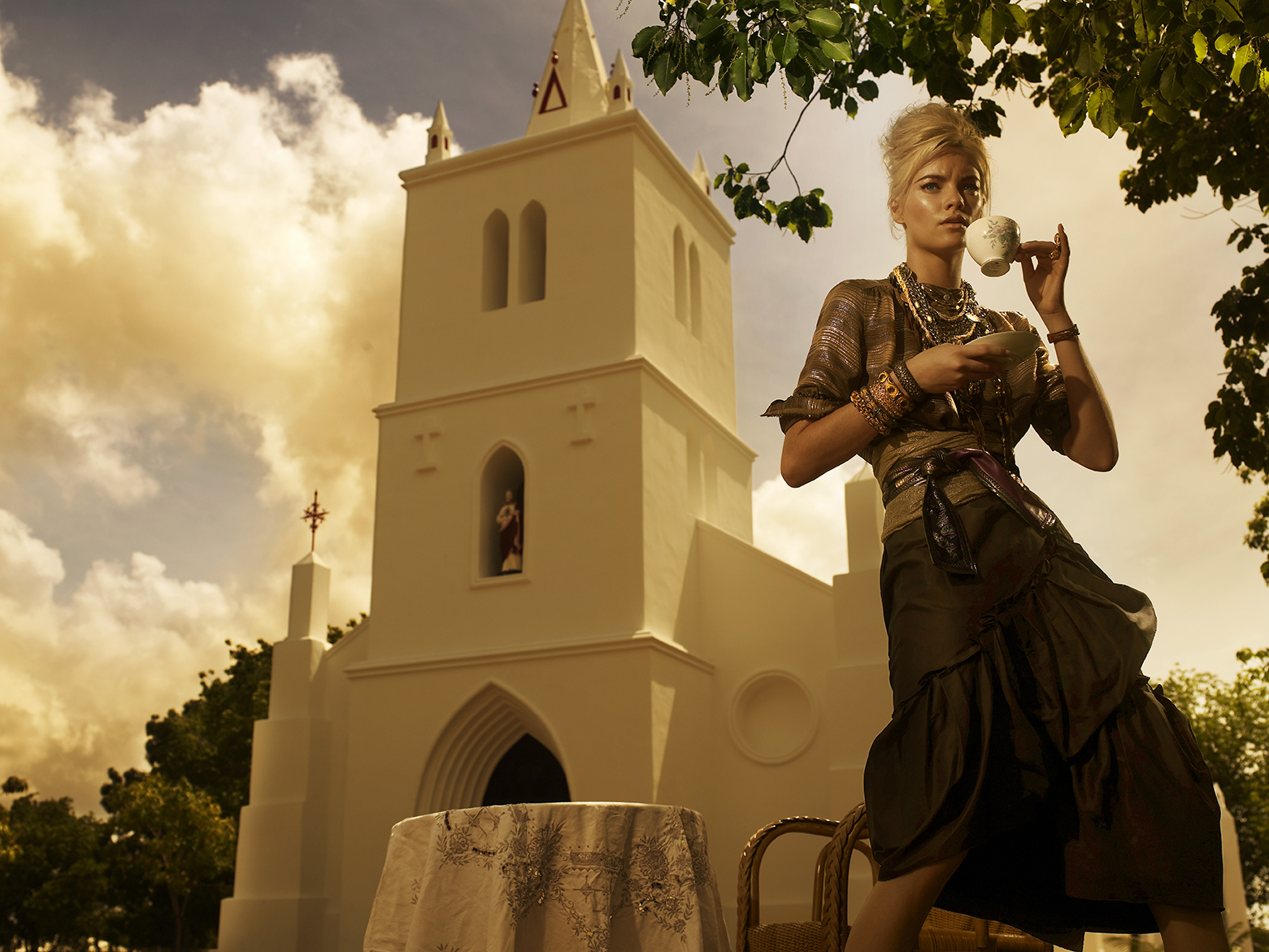 My favorite location was sun pictures, which is the oldest outdoor cinema in the world. It’s a type of outback Cinema Paradiso. It dates back to 1916 and is located in the Chinatown section. The fantastic old structure is full of old movie memorabilia and the seats are the original, old metal deck chairs from its creation. In the early days they used to have king tides (the water level rose 20 ft), so the water would cover the cinema floor and flying fish would jump in the air, in front of the screen. The audience where given buckets to put their shoes in and often the women were carried out on their date’s shoulder, to avoid getting their feet wet. Sun Pictures is magical and recreated in Baz Lurhmann’s film Australia. 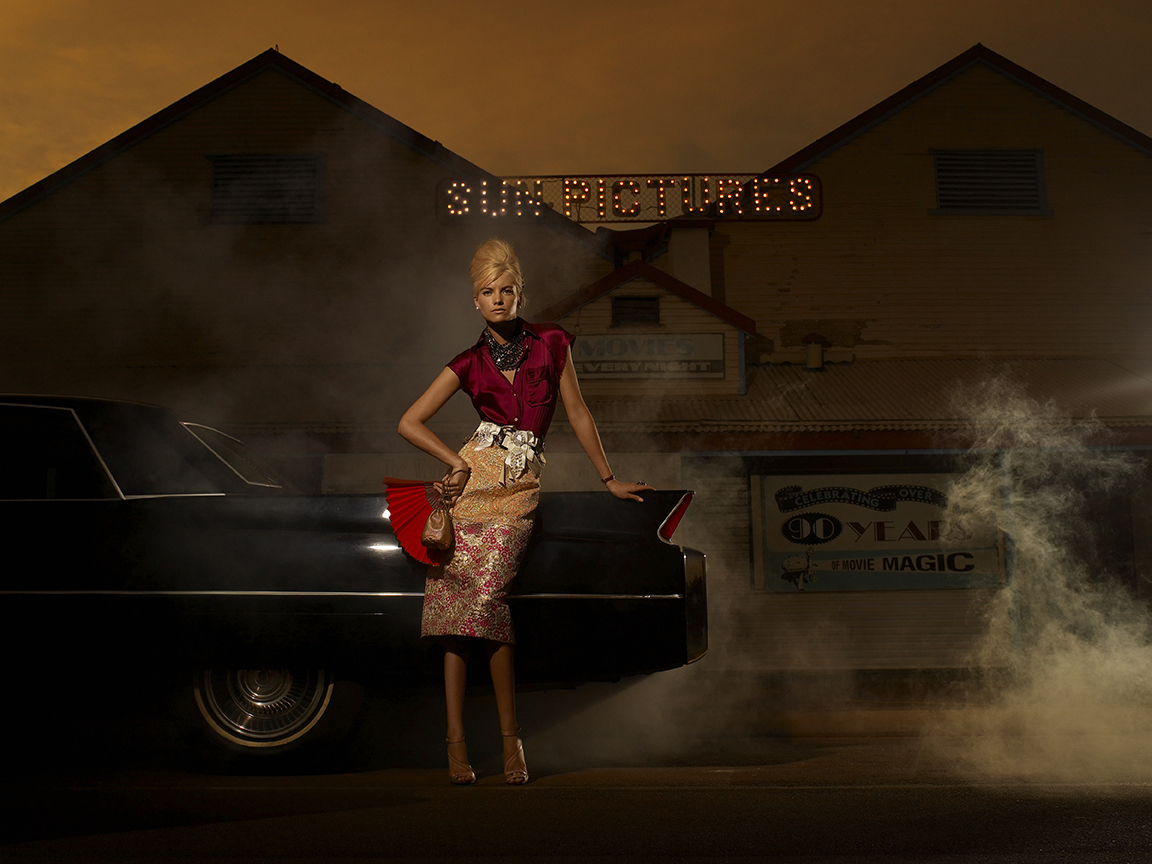 The mallard is technically a flying boat and the same one Howard Hughes flew. The Paspaley family bought two from America and refurbished them, to take journalists to the pearl farms. We were fortunate to fly over some of the most magnificent geography I’ve ever seen. Brightly colored reefs, horizontal waterfalls, where the water was pulled through huge cliffs rising out of the ocean, and then shooting the water back out horizontally. Mark and I were taken to the pearl lines by speedboat, where we each had the luxury of plucking our first pearl! We ended our day feeding the sharks from a speedboat. Which our team loved and will never forget. 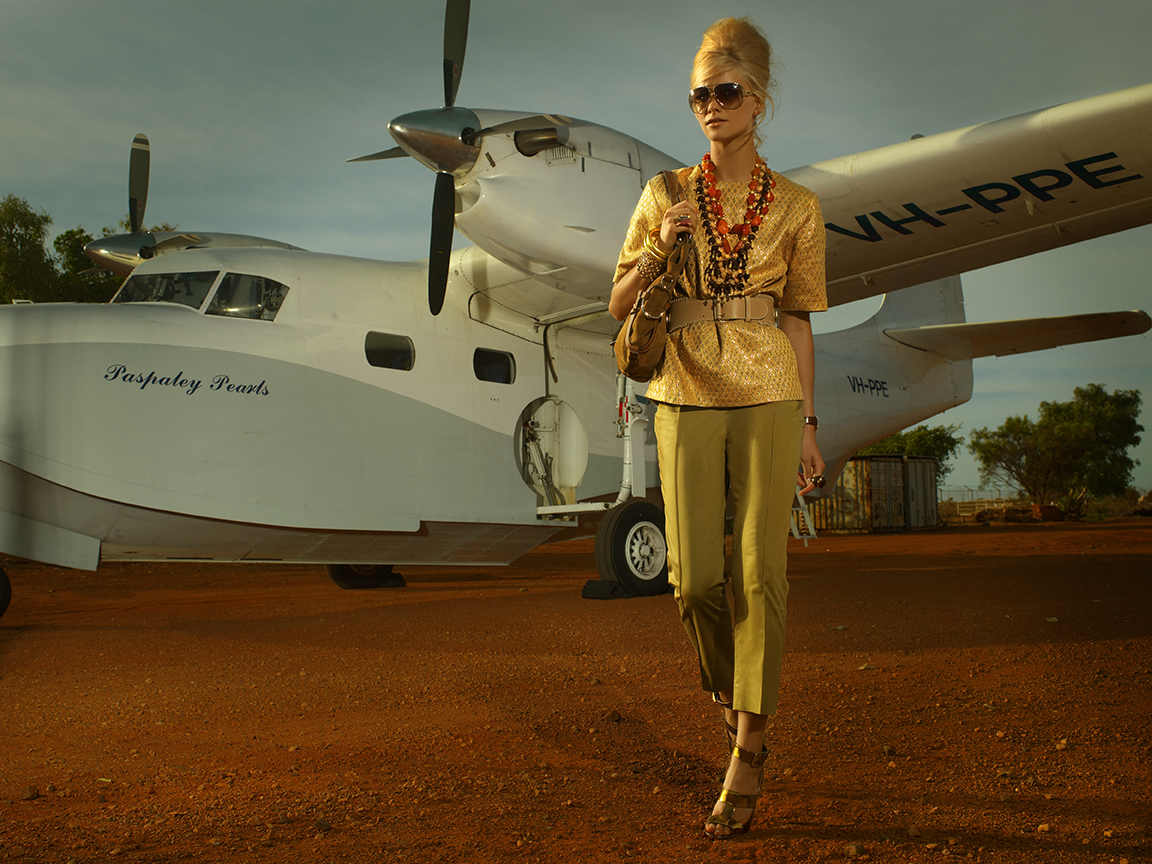 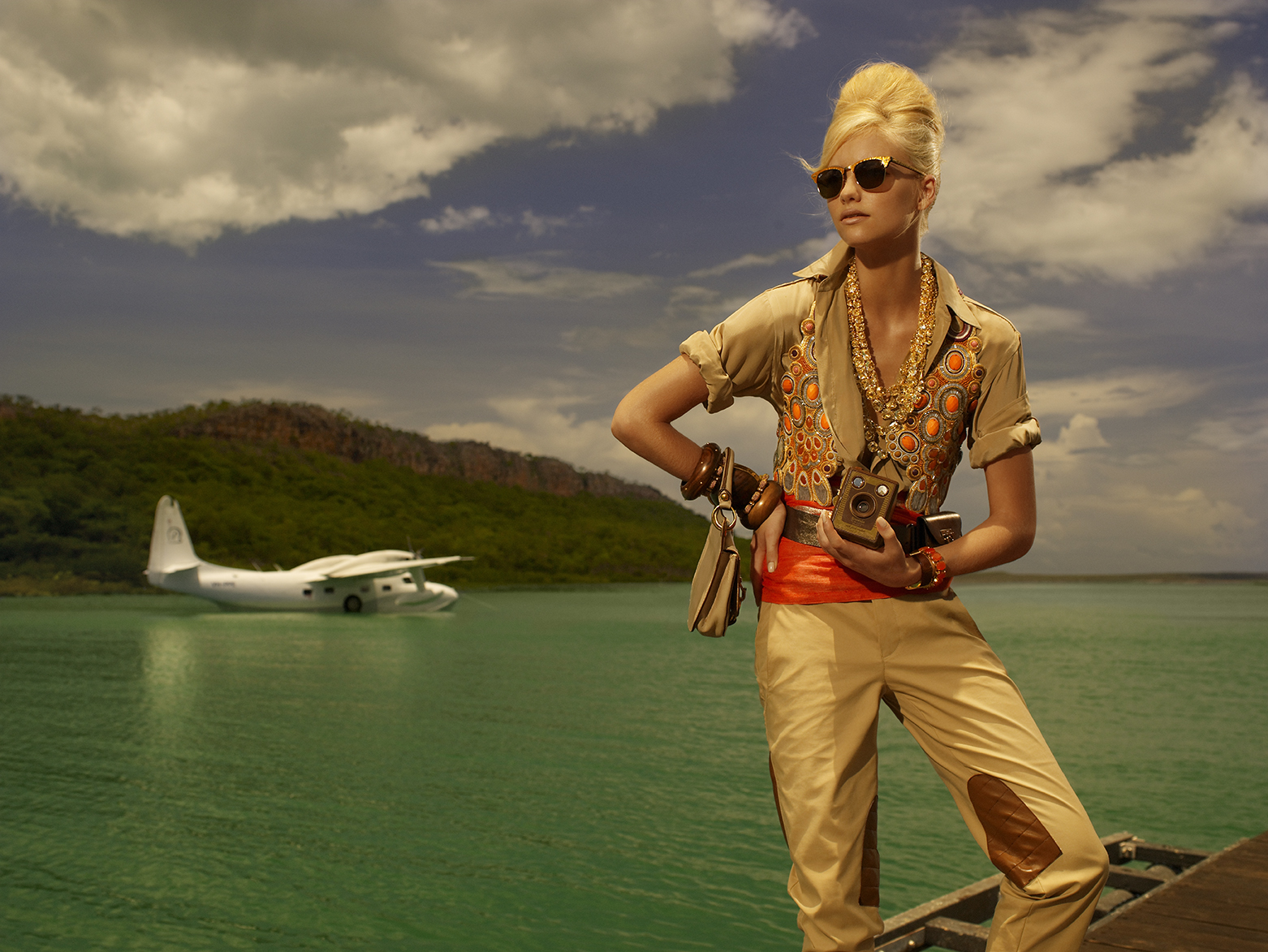 Cable beach has white powdery sand and turquoise blue water. It’s called Cable Beach, as there was once a telephone cable from Broome to Singapore. Broome is so remote, that Singapore is its closest major city. The idea was to have a type of Bedouin camel train, so we spoke to the local camel safari owner to organize the camels. However when we arrived, there was only one camel! …. Not really a camel train! He supplied us with three more camels, just as the sun was setting. It was a stunning way to end our story. The crew sat there with the sun turning from orange to red as it dipped down on the horizon, we were all feeling so very grateful for this fantastic adventure. 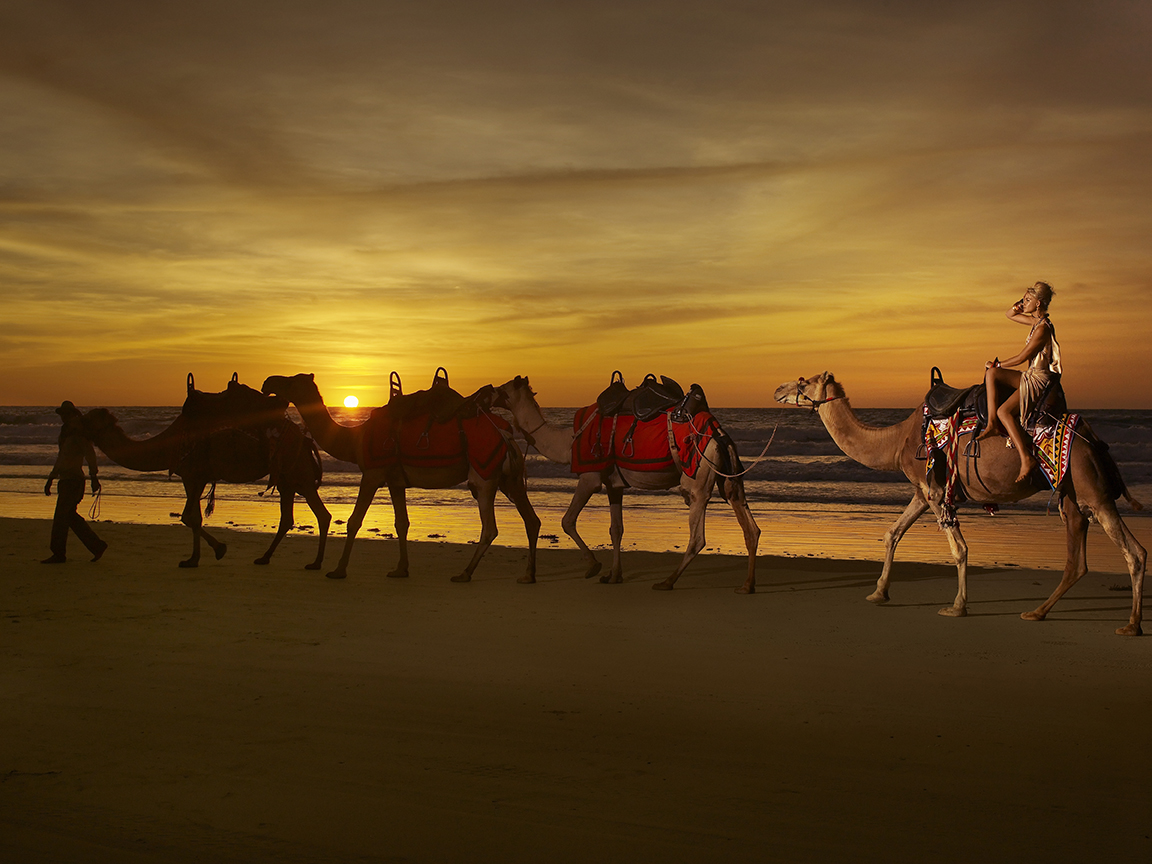 Click HERE for my personal Top 10 things to do in Broome, Australia.

From a Modern Nomad