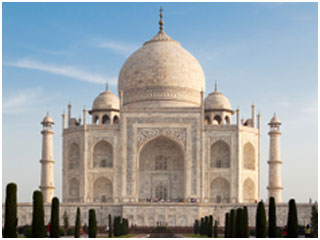 Taj Mahal is regarded as one of the wonders of the world, and most historians have noted that its architectural beauty has never been surpassed. The Taj was built by the Mughals, the Muslim rulers of India. Built completely out of white marble, its stunning beauty is beyond adequate description, particularly at dawn and sunset Taj Mahal was built by Emperor Shah Jahan in the memory of his dear wife and queen Mumtaz Mahal. It is an “elegy in marble” or some say an expression of a “dream.” Taj Mahal (meaning Crown Palace) is a Mausoleum that houses the grave of queen Mahal at the lower chamber. The grave of Shah Jahan was added to it later. Taj Mahal was constructed over a period of twenty-two years, employing twenty thousand workers. It was completed in 1648 AD. at a cost of 32 Million Rupees. The construction documents show that its master architect was Ustad ‘Isa, the renowned Islamic architect of his time. The Taj stands on a raised, square platform (186 x 186 feet) with its four corners truncated, forming an unequal octagon. The architectural design uses the interlocking arabesque concept, in which each element stands on its own and perfectly integrates with the main structure. It uses the principles of self-replicating geometry and symmetry of architectural elements. The mausoleum is a part of a vast complex comprising the main gateway, an elaborate garden, a mosque, a guesthouse, and several other palatial buildings. The Taj is at the farthest end of this complex, with the river Jamuna behind it. The large garden contains four reflecting pools dividing it at the center. Each of these four sections is further subdivided into four sections and then each into yet another four sections. Like the Taj, the garden elements serve like Arabesque, standing on their own and also constituting the whole. You may have seen it in photographs or in movies, but nothing can prepare you for seeing it in person. It’s one of the most romantic and beautiful places I’ve been to in my life.