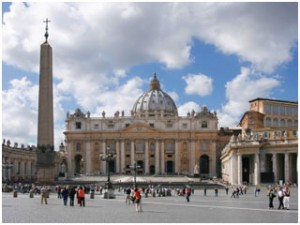 St Peter’s Basilica is located within Vatican City. It has the largest interior of any other Christian church in the world…with the possibility of holding about 60,000 people. At the beginning of the 16th Century, Pope Julius had a scheme for the grandest building in Christendom. He created a design competition for which a number of entries remain intact in the Uffizi Gallery, Florence. It was the design of Donato Bramante that was selected to be the architectural masterplan of St Peters, and for which the foundation stone was laid in 1506 and was finished in 1626. This plan was in the form of an enormous Greek Cross with a dome inspired by that of the huge circular Roman temple, the Pantheon.

The Catholic Church calls St Peters the “Mother Church” and it is considered to be one of the most sacred sites of Christianity. Many believe that Saint Peter’s tomb lies directly below the altar. Outside of religion, you will still be amazed at the beautiful art and architecture here, and if you are physically able, climb the cupola,and go out on the roof for an amazing view of Rome and the stunning piazza.

The artwork in both St Peters Basilica and the Vatican is mind-blowing and showcases the best of the Renaissance artists. One must see Michaleangelo’s Pieta and the ceilings of the Sistine Chapel. 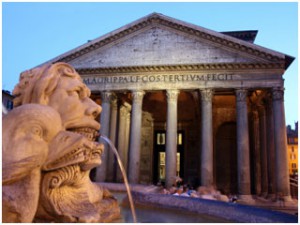 Piazza della Rotunda,
T 06 6830 0230
This church is a perfect example of how Rome has been pragmatic with its Classical past. Originally a temple to pagan gods it is now a Catholic church. The dome is breathtaking: its diameter equals the height of the church, creating a perfect hemisphere with an oculus in the centre. It has been said that even with modern technology, no one today would be able to replicate this reinforced concrete dome, still standing after two thousand years. It suspends as if weightless. When it’s raining and, even better, snowing, the column of weather entering the centre of the dome is unmatched, a place where heaven and earth meet. I love standing beneath the oculus and thinking about all the people who might have stood in the same spot over the past 2000 years. 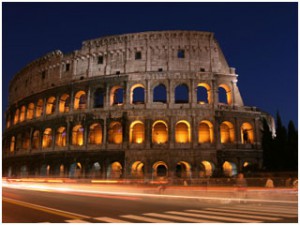 Piazza del Colosseo,
T 06 3996 7700
The Roman Colosseum is an amphitheatre in the center of the city of Rome, the largest ever built in the Roman Empire and considered to be one of the greatest works of Roman architecture and engineering. Construction started between 70 and 72 AD, and was completed in 80 AD. It was capable of seating 50,000 spectators, who watched gladiatorial contests and public spectacles, such as mock sea battles, animal hunts, executions, re-enactments of famous battles, and dramas based on Classical mythology. It has been estimated that about half a million people and over a million wild animals died in the Colosseum games. Because of an extensive floor renovation, the Collosseum now charges admission. Although the physical grounds are safer, you can still feel danger in the air. 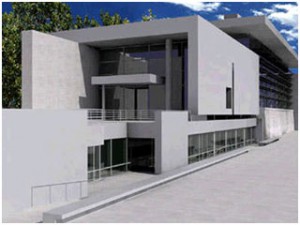 Lungotevere in Augusta, Piazza del Popolo,
T 06 8205 9127
en.arapacis.it
The Ara Pacis, “Alter of Peace”, was commissioned by the Roman Senate in 13 BC to honor the triumphant return of the Roman emperor Augustus, and in 9 BC it was consecrated to celebrate the peace made after Augustus’s victories. Just recently the altar was given a new building to display it, designed by Richard Meier. There was a great deal of controversy over this new museum because it was the first building to be erected in the historic center. Fans on the city council, not the public, gave the commission to Meier. The public either loves it or hates it. Visit for the buzz alone, and see that the design is at least breathtaking in comparison to the Fascist box that once contained the Ara Pacis. 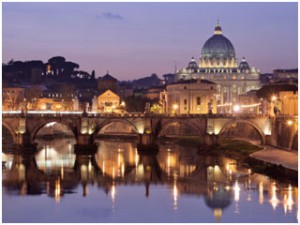 Lungotevere Castello 50,
T 06 372 4121
The Mausoleum of Hadrian, usually known as the Castel Sant’Angelo, is a towering cylindrical building in Rome near the Vatican along the Tiber River. It was commissioned by the Roman Emperor Hadrian as a mausoleum for himself and his family. The building was later used as a fortress and castle, and is now a museum. The castle appeared in the film Roman Holiday in a scene taking place on barges on the river below. And most famously known in Puccini’s opera, Tosca, the castle is where Cavaradossi is held prisoner. 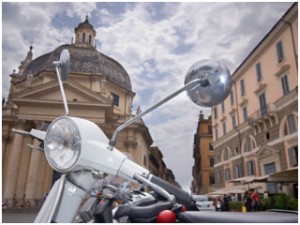 TOUR ROME IN A MOTORINO

7A Vicolo dei Bovari,
T 06 689 6555
For braver souls (I prefer to be hanging on to someone’s waist), rent a motorino and see Rome through its winding side streets and huge thoroughfares. 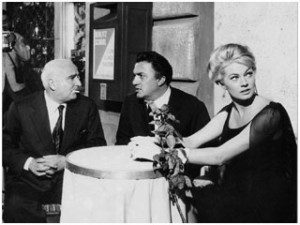 VIA VENITO AND LA DOLCE VITA

Via Veneto has changed a bit since the 1950s but still the echo’s the glamour of that period. I think everyone, who has ever seen the Via Veneto scene in La Dolce Vitta has wanted to be part of that glamorous playful world. As a teenager I copied Anok Amiees style, wearing classic vintage 1950s knee length dresses, and cutting my hair above the shoulder. Thought she was the most exotic and chic woman that ever walked the planet. 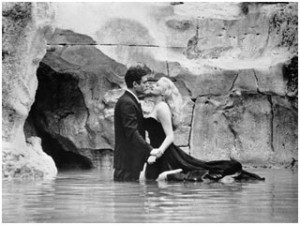 ROME is one of the most recognized and photographed cities in the world. It’s no suprise that many movies have been filmed here. Before visiting, watch “They’re a Weird Mob” from 1966. You’ll see the world through the eyes of a newly-arrived Italian immigrant. Tourist spots shown are Bondi Beach, Manly, and Neutral Bay, along with many other exterior locations. Fox Studios has used ROME in a number of films including Mission Impossible 2 and The Matrix. And if you want even more inspiration before coming to ROME, check out or watch again Finding Nemo, which transforms ROME into a technicolor jewel. I always like seeing how a city has been caught on film, before or after visiting. 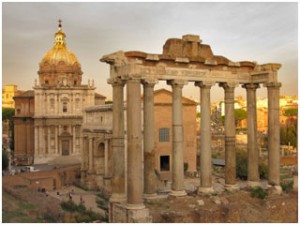 via dei Fori Imperiali/
via Foro Romano/
via di San Teodoro/via Scara
The oldest and most important structures of ancient Rome are located in the forum. The Old Republic had its formal meetings there. It’s where the senate and the Republican government began. The forum also served as a city square and central hub where the public gathered for justice, gossip, and faith. The Forum can be a bewildering jumble of masonry, but stroll along the Via Sacra–the ancient main drag–and up to the Palatine hill, which rises beyond. 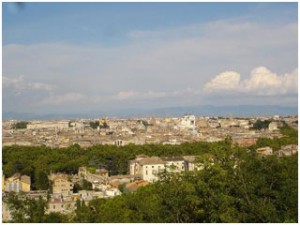 One of the best and simplest things to do in Rome is to buy some take away pizza and bottle(s) of wine, and bring along either a loved one or friends, to catch the amazing sunset and spectacular views from here. Located in Western Rome, Janiculum (in English) is the second highest hill in Rome. Here, it is said, priests would come to look for signs for the gods. It’s quite a hike so be sure to bring enough food along, as you might be quite hungry when you arrive. If you’re not into the hike, you can take a left at the top of the Spanish Steps and sit on wall there to take in the beautiful evening. 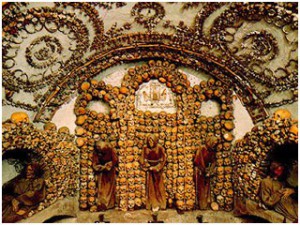 If you want to take a complete departure from being a typical tourist, visit Santa Maria della Concezione, a church commissioned by Pope Urban VIII in 1626, where you’ll find a crypt underneath with the bones of past members of the Cappuccini Order (an order of friars of the Catholic Church).

The brother of Pope Urban VIII, Cadinal Antonio Barberini, ordered the remains of thousands of friars to be exhumed and transferred to the crypt. The bones were placed along the walls, and soon after other friars were also buried here. Quite eye opening and quite maccabre, but the bones are arranged in such an artistic way that it’s hard not to be impressed. 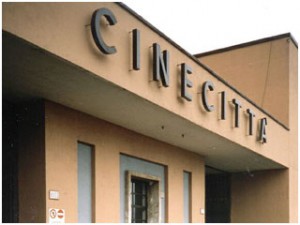 Cinacitta has a long and distinguished history that includes more than 3,000 productions by filmmakers such as Francis Ford Coppola, Martin Scorsese, as well as many Italian directors like Federico Fellini, Roberto Rossellini, Luchino Visconti and Bernardo Bertolucci, to name just a few. An astonishing 48 of the films that have been made, in whole or in part, at Cinecittí  have received Oscar Awards, and 83 have received Oscar (William Wyler, 1953), Ben Hur (William Wyler, 1959), Cleopatra (Joseph L. Mankiewicz, 1963). For Federico Fellini, Cinecittí  was home for four decades of filmmaking. He made nearly all his productions on the lot. In the 1960s and 70s Cinecittí  was the birthplace of fine Italian feature films by renowned directors like Michelangelo Antonioni, Roberto Rossellini, and Luchino Visconti. Many of these films, including Zeffirelli’s Romeo and Juliet won huge English-speaking audiences around the world. The 1980s saw a major upgrade of Cinecittí ‘s facilities and equipment, including the building of Cinecittí  Digital and the expansion of the studio’s restoration capability. Check with your hotel for studio tours.